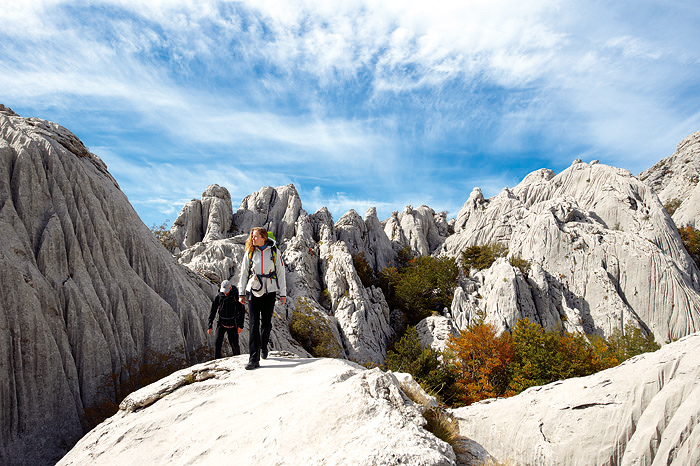 If you wish to have an active holiday, or you have an adventurous spirit, then the Paklenica Riviera is the right place for you. The Paklenica National Park is the ideal destination for those who love walking and hiking, but that is not all. At the very entrance to the Velika Paklenica canyon, you are welcomed by an impressive cliff with possible climbing routes marked – the dream of all climbers and mountaineers.

Further afield, the rapids of the upper course of the Zrmanja River are an ideal place for unforgettable rafting and canoeing, while those who prefer to travel on two wheels will be attracted by the numerous bicycle paths. The karst landscape abounds in extraordinary caves, and three can be visited in the immediate vicinity – Manita Peć, Modrič Špilja, and Cerovačka Pećina. But adventures can be expected even on the seacoast, from sailing and rowing, to diving into the depths of the sea.

Paklenica National Park has over 150 kilometres of maintained hiking paths and trails, ranging from easy tourist trails to those more demanding that lead to the Velebit peaks (Vaganski vrh 1,758 m and Sveto brdo 1,753 m). There is a wide range of attractive locations accessible by maintained educational trails (Mirila, Terezijana, Premužićeva staza / Premužić’s Trail) in the wider Velebit Nature Park area. Hiking maps are available at all info points in the Paklenica Riviera.

Paklenica National Park is one of the best-known climbing destinations in Europe. The vertical cliffs of Velika Paklenica canyon, over 400 metres high, are located at the very entrance to the Park and are only 2 km from the coast. For this reason, Paklenica is a favourite with climbers with families. A frequent sight is a baby sleeping peacefully in a baby carriage, or a part of the family enjoying the beach, while the others climb. Expert climbing guidebooks are available at the Park Management building at the Park reception.

Rafting on the wild rapids of the upper reaches of the Zrmanja River will leave even the most experienced adventurer breathless. When the water levels are lower in the summer months, there are organised kayak and canoe expeditions.

Get a glimpse the subterranean world of Velebit! A karst area, Mt. Velebit has an abundance of caves, and expert guides are available to take you on a speleological adventure. We absolutely recommend you visit Manita peć cave in Paklenica National Park, and the Cerovačke pećine (Cerovac Caves) near the town of Gračac, both protected geomorphological natural landmarks equipped for tourist excursions. There are other caves accessible to visitors; attractive due to the variety of forms and the wealth of stalactites and stalagmites and other cave formations.

Lovers of movement on two wheels can visit the attractions of the wider area on a bike. Aside from the area of the National Park Paklenica, which is after all a hiking paradise, the nearby area has 40 kilometres of sloping bike trails leading through a distinctive landscape of sea and mountains, touching attractive historical and natural sites. It is also possible to head by bike to the islands of the Zadar archipelago, taking the old road over Velebit or to Lake Vrana Nature Park…

The undersea of the Velebit channel is interesting to see and explore, and we certainly recommend diving under the sea surface. The most attractive locations are located close to Starigrad-Paklenica and near the bridges of Pag and Maslenica. You can expect slopes and sea walls rich in fish, colourful sponges, cnidaria, slugs, octopus and schools of small fish and specimens of large sponges, as well as the remains of the old Maslenica bridge and a Russian shipwreck from the 1970s, which will prove a challenge for more experienced divers.

Surrounded by the cliffs of Velebit in the hinterland of Starigrad-Paklenica, at 700 meter altitude, you can find the Vaganac Adrenaline Park. In the Park you can experience bridging, via ferrata, abseiling, climbing & rappelling.