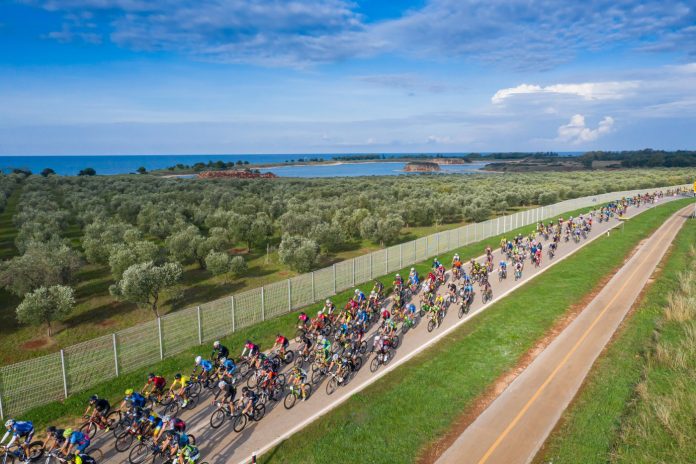 It’s the end of October. It’s that time of the year when most cyclists in Europe start thinking about riding their bikes indoors or try to convince themselves that going out in cold and wet conditions is a fun thing to do, yet here we are, in Northwestern Istria, getting ready to take part in the 8th edition of Istria Granfondo, the most popular cycling event in Croatia as proven by the ever-increasing number of participants. Our small but enthusiastic team was invited by Plava Laguna, one of the co-organizers of the event, to experience the race first hand and tell the story.

Riding in short-sleeved jerseys wasn’t the only promising fact about the active weekend ahead, the organizers had prepared a handful of other surprises such as the opportunity to ride with some of the best Slovenian and Croatian professional cyclists – we usually see Tadej Pogačar, Radoslav Rogina, Josip Rumac on television, this time we had the chance to see them in person in Umag at the starting line. We were also aware of the lavish prizes meant not only for the fastest but also the luckiest riders since a raffle was sure to be part of the program. All these combined with the beauty of the landscape in Northwestern Istria were plenty enough reasons to draw a record number of participants, almost 700, this year.

Half of our team, Zlatko that is, used their skills and the bike that Primož Roglič rode for his win of the Vuelta a España which was kindly provided by the sponsor of the entire event, Keindl Sport, to experience the race towards the front, and the other half of the team, Oana to be more precise, got the task to see if being part of the end of the race could still be fun.

Here are Zlatko’s thoughts after riding the Classic route, 114 km with 1650 m of ascent: “The race didn’t go as planned, I started with the front group but crossed the finish line among the last. I do, however, have plenty of excuses for that. Riding in a big group is never a relaxing experience, and things were complicated even more by a headwind that compressed the peloton. There weren’t any challenging climbs in the first 30 km, so we rode in big groups with sudden changes of rhythm. Just as we were getting sick and tired of the wind, the appetizer was served: the 5-kilometer climb to Vižinada with an average gradient of 5%, which chopped the big groups into smaller ones. After the refreshment point at the end of the climb, a scenic section followed towards Karojba and Motovun. By now the nervousness at the beginning disappeared, and we could enjoy riding the undulating Istrian terrain.”

The main dish was served after the swift descent from Motovun to Livade in the form of a 5-kilometer climb to Oprtalj with an average gradient of 7%, which was more of a challenge.

“I rode by myself, at my speed, there was no way to use the group, I had to rely on my fitness and spend my energy wisely since I knew all the riders of the Classic route had to make it to the top of the climb not once, but twice. There was no need to stop at the refreshment point in Oprtalj, I still had energy gels that I had picked up in Vižinada, so I could just ride on and enjoy the descent the twists and turns of the newly asphalted road, perhaps the section I enjoyed most.”

The descent was followed by a 3-kilometer strade bianche segment – the organizers proved once again that they were in touch with the latest trends in the world of cycling.

“There was no problem riding a road bike on the completely flat, well-trodden gravel road; however, this must be my unlucky year since I managed to get a flat tire for the third time in a cycling marathon! I had to wait, but with the help of my fellow rider (thank you Darko for the pump!) I was able to continue. By this time the goal had changed to: make it to the finish line in time to enjoy a warm portion of pasta.

Maybe I overestimated my abilities, perhaps I cooled down while waiting for a pump, maybe I didn’t eat enough or perhaps I hadn’t fully recovered from my sore throat that had been bothering me in the past few days (I told you, I have a bag full of excuses!), the bottom line is the second time I needed some extra 9 minutes to make it to the refreshment point in Oprtalj where I stopped for isotonic drinks and snacks.”

In the meantime, a friendly little group formed, and that helped our unlucky rider make it to the finish line faster. On the map the last 30 kilometers look like a beautiful, long downhill section, in reality, there are still plenty of short uphill sections, and one still needs to focus on getting over them which is more difficult after two climbs to Oprtalj, when the tank is more or less empty.

“For a good part of the day, I rode way faster than on a regular Sunday ride or during other marathons – the Bianchi XR 4 might be to blame for that. With its Campagnolo Super Record EPS components and Bora carbon wheels, it would have been a pity not to see how fast it can go. My conclusion is the bicycle is a top-of-the-line work of art built for winners, it can go much further than I was able to!”

“To tell you the truth, I was in doubt: to ride or not to ride Istria Granfondo? I knew I my fitness level would allow me to complete the 94-km course, and its 1170 m of altitude gain while enjoying the spectacular views I had a hunch would be on the menu; however, I’m not particularly keen on riding in big groups. At the same time, I didn’t know what riding on roads open for traffic would mean exactly, since I knew at some point the end-of-the race vehicle driving approximately 30 minutes behind the leading rider would overtake me. Would I ride entirely on my own with virtually no support? I had to find out.”

And she is glad she decided to go for it because she managed to ride for an entire hour and 15 minutes on roads closed for traffic, basically the whole of the 30-km initial section that used some of the main and faster roads. After that point, the traffic on secondary roads and observing traffic regulations were no problem whatsoever.

“I stopped at the refreshment point in Vižinada to enjoy the variety of snacks and drinks and have a chat with the enthusiastic and helpful volunteers who gave me an even bigger boost than the isotonic energy gel on I got to try, then continued on the beautiful course. I even had to stop to take a picture once and decided to come back to explore the region in more depth.”

The section around Motovun was somehow busier with traffic, but she was not there for the win, so she made her way safely towards the climb to Oprtalj where the road was still closed thanks to the riders of the Classic course still making their way up the climb for the second time.

“I had company, so that was fun too. Even riding at the end of the race, you’re never really alone, so that stopped being a worry pretty soon after the start. Another worry I had, that I might get lost (though getting lost in Northwestern Istria is not the worst thing that can happen to me, I have to admit), disappeared almost immediately because there were arrows pointing in the right direction before all turns and crossroads, not to mention all the volunteers whose cheering made the experience even more enjoyable. After my second stop at the refreshment point in Oprtalj, I continued on the road to Umag, taking in the views and discovering one pedal stroke at a time what the region has to offer. It’s hard to pick the highlight of the experience, I enjoyed it all, but that special fragrance of salty sea air mixed with the scent of pines welcoming us at the finish line certainly deserves a special mention.”

The more poetically inclined half of the riding team took her time and finished the Small course in about four and a half hours (which makes for an average speed of 20 km/h) and concluded that this might just be the time limit in which both bike marathon should be completed. After that, the entire finish line area starts to look more like the parking lot that it is in everyday life, and less like the finishing area of a great cycling event. Istria Granfondo is not only for the fast riders; anyone can train to complete the shorter event and enjoy the beautifully crafted route, unforgettable landscape, and the well-known Istrian hospitality.

Our team was fortunate enough to enjoy one additional sunny ride on the second day of the Istria Granfondo festival – the Family&Gourmet Tour on Sunday, a kid-friendly 25-km recreational bike ride starting this time in another Istrian gem, Novigrad, and had a chat with organizers from the Northwestern Istria cluster.

“We are pretty satisfied with this year’s edition of our Granfondo. We are also delighted that such a large number of riders recognized the quality and tradition of our event. We did everything in our power not to let them down, to offer a safe and attractive course. We have something in store for everybody – for those who are here to win, those who are visiting Istria for the first time, and those who just want to spend an active weekend at the seaside with their families. Our hotels put together great value-for-money packages, we organized a raffle to give everyone the chance to win valuable prizes, we hope participants enjoyed the race expo and delicious gastronomic offer. We believe these are the reasons why each year we have more and more participants, not only riders from Croatia, but from the entire region, Italy, Slovenia, Austria, we’re happy to see an increase in participants coming from further away, from the UK, Germany or Hungary, we have participants who have been with us since our very first edition – this a great recognition of our efforts. ”

The 8th edition of Istria Granfondo is a success. One can easily see the collective effort of a strong team of organizers behind it all, a team with clear goals and ways to make those goals happen. When the Northwestern Istria’s ideal terrain and climate meet the hospitality of the hotel companies involved such as Plava Laguna and the technical expertise of the team that makes Cro Race possible, the result can only be an event that is worthy of a season’s grand finale. Istria Granfondo will hold a special place in our race calendars for years to come.