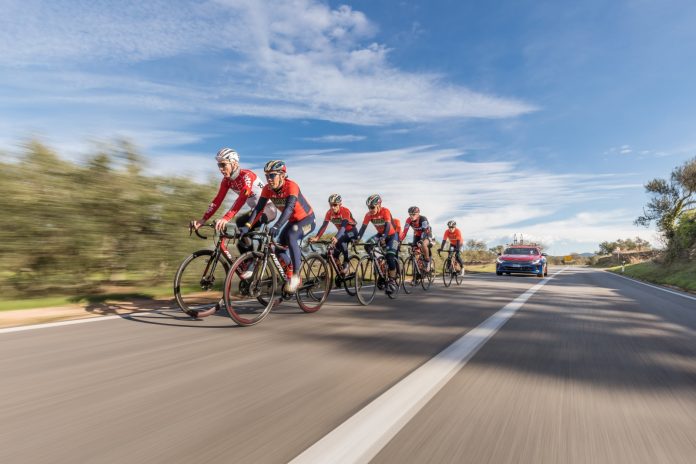 Bahrain Merida Pro Cycling Team was active in Croatia! For the second year running, they held their first training camp of the season on island Hvar. We asked Paolo Slongo, the longtime coach of Vicenzo Nibali for his views on what the island has to offer to cyclists.


For the second consecutive year, Bahrain Merida Pro Cycling Team held its first training camp of the season. The team is truly international with sponsors and riders from all across the world. But there is a number of Croatians on staff, such as ex-pro Vladimir Miholjević, that recommended ►Hvar as a great base camp. The camp lasted for two weeks in early December. Riders used the dry and sunny weather to get some quality early season training miles, and the team presented its plans for the new year to the press in the impressive surroundings of an old fortress.

After a great experience last year, the team returned once again to the island known for having over 2700 hours of sunshine in a year. The average temperature in December is above 10 degrees Celsius. Apart from warmer weather, Hvar is known as yachting heaven. Crystal clear waters of Adriatic Sea, the wonderful smell of lavender and numerous bays and harbors attract sailors from all over Europe. Island Hvar is situated in south Adriatic, you can reach it by ferry from ►Split or Ancona. If you are flying in, the nearest airport is on the neighboring island ►Brač or on the mainland in Split.

Active in Croatia got more information about how the team enjoyed their stay on the island from Paolo Slongo, team’s Head of Performance.

How did you find Hvar in general?

For the second year running our team chose Hvar as the base for our December training camp. It’s a very important meeting because it marks the only time of the year when our whole team gets together, from new riders to staff and management. A training camp where you not only ride but also take part in organizational meetings, where technical partners test new equipment and carry out technical tests. This year we also had the official presentation of the team for 2019. Hvar reconfirmed itself as an island ideal for all our needs. Perfect in all aspects. Fascinating location in winter, and if I may add – in summer even more.

How was the riding on the island?

Hvar offers routes very suitable for training during this part of the year when the athletes return to training after a long period without races. Undulating terrain, with nice climbs and possibilities to create routes for long rides of almost four hours.

Was the weather warm enough for riding during your stay?

The climate is good for this period of the year. You have to take into account that a lot of our athletes come from cold and humid areas, where it often snows or rains. In December they wouldn’t have been able to train if not indoors.

How would you rate the accommodation facilities?

Both this year and last, we found the accommodation to be excellent. Comfortable and on a high level, for our athletes it was pleasurable to spend free time there during the training camp. The sea view from our hotel was so beautiful that almost all riders posted it on various social media. The beauty of the place was a great help to train better.

Besides pictures, some of the riders also posted their GPS files on Strava. If you want to ride the same roads as the pros, you can follow Grega Bole or Matej Mohorič and find out more about where they rode during their stay.

Team Bahrein Merida found all they needed for a winter training camp on Hvar. Nice quiet roads, great weather, and friendly hosts – what more can one ask!

Krka Bike – cycle through the beautiful landscape with a glimpse...