Home Cycling Majstorska cesta – A panoramic gravel road through some of the most... 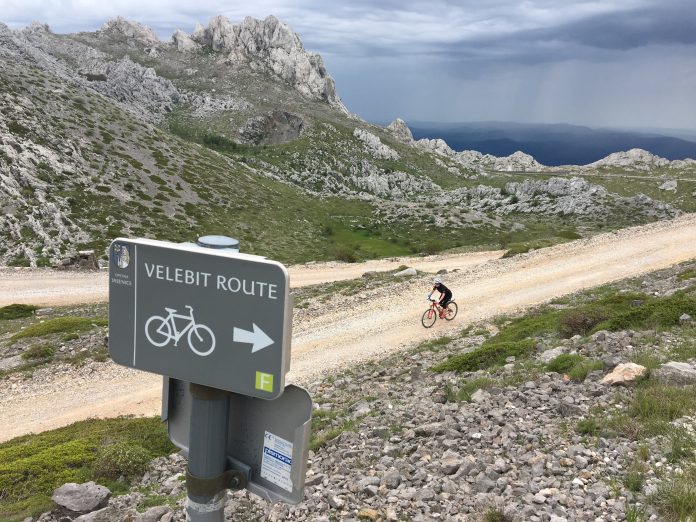 Majstorska cesta is a 36-kilometer long gravel road traversing the Velebit Mountain and connecting Dalmatia with inland Lika regions. It crests at 1045 meters above sea level, at Mali Alan, and passes by Tulove grede, a natural rock formation overlooking the sea.

Besides breathtaking nature, the road is notable for its rich history. This was the first major road that traversed Velebit and connected Dalmatia with the rest of the country. After seven years of construction and many complaints about the ever-increasing construction cost, it was opened in 1832. It was an engineering miracle for the time. With several hairpin bends chiseled in the side of the mountain and a gradient below 5%, it got its name from the German word for a masterpiece – Meisterstück. The fact that it is still in use and good condition is a testament that the name is not an understatement.

In more recent history, the Croatian War of Independence was fought here. There are still some signs that mark off the areas of the mountain that have not been completely cleared of land mines. These areas are well marked and off the road and hiking paths.

The best way to experience the road is on a bicycle. The roadbed is a combination of tarmac and compact gravel. The lower slopes are tarmacked on both sides to help local traffic. The middle 20 kilometers are all gravel.

Due to the gradient being below 5%, there is very little water damage on the gravel section. The combination of asphalt and good quality gravel makes this route suitable for a new generation of road bikes with tires wider than 35 mm. Besides these gravel bikes, there are many cyclists climbing on mountain bikes, cross bikes, and even on loaded touring bikes.

There is no parallel valley road to go around the mountain. Only cyclists in very good form or on an e-bike should try to go out and back in one ride. This ride would be more than 70 kilometers long and would have close to 2000 meters of climbing.

In Sveti Rok, there is a small Hostel where you can sleep, park, and eat. While Obrovac is the best starting point for minimal time spent on busy roads, Zadar and its numerous hotels are just half an hour drive away if you prefer to dip your feet in the Adriatic after the ride.

Velebit is a mountain with two faces. The sea facing side has a barren rock with little or no vegetation. Once on the higher slopes, there is more greenery among the grey rock, but nothing to offer shade to the cyclists.

The last 5 kilometers of the sea facing side snake among giant rock formations. It becomes immediately clear why the German western movies about Winnetou were filmed here. Besides western heroes, these rocks inspired numerous folk tales and fairy tales, and it’s easy to understand why.

Once you pass the top and get on the Lika side of the mountain, it is like a different world. Forrest, shade, and greenery all around you. Just after a couple of hundred meters, the air, color, temperature, wind – everything changes.

Here, on the border of continental and Mediterranean climates, the weather is constantly changing. The changes are fast and abrupt. There are no open lodges at the top, so it is necessary to be prepared. Waterproof and windproof layers, extra water and food, fully charged mobile phones, and a first aid kit are all mandatory equipment. Diverse weather conditions also make for great variety in plants and flower species. It is said that there are around 2000 different plant species on the mountain, making it an extremely valuable natural habitat.

The best time to visit is in late spring and early autumn. Winters can be very harsh and long, and it can be scorching hot on the Dalmatian side during the summer.

There are a couple of events that use the road. Outdoor lab team organizes two events that incorporate the road in their routes. Laid-back and not crowded; these events provide a great introduction to cycling on Velebit.

More and more people are discovering cycling to be much more than a way to stay fit and competitive. Discovering new places, finding new friends, and getting in touch with nature can all be done on a bike ride. And we can think of few better places to do all that than on Majstorska cesta.

Best Croatian cycling events – on the road and on the...

Parenzana – explore the history and beauty of inner Istria