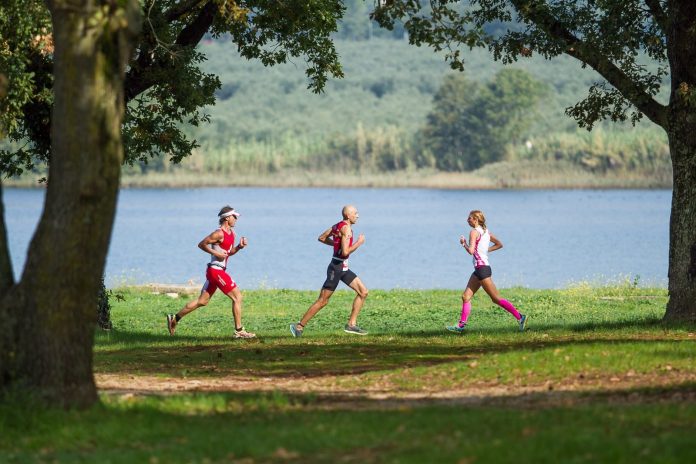 A character of a race is determined by a number of factors. There is the course and the surroundings, the time of the year and the predominant weather, the local community, volunteers, fans, sponsors and many more. One factor that is often taken for granted and overlooked are the organizers themselves.

The race is in many ways a race directors’ child, as they profoundly impact all parts of the race and create a unique atmosphere around the race. It is exactly this atmosphere that separates great races from the good, this feeling of an athlete being taken care of and being a part of community despite arriving from another country, another culture and not speaking the language.

An experienced crew from Triathlon Club Swibir has managed to create just such an atmosphere around the ►Poreč Triatlon powered by ►Plava Laguna half distance triathlon. The dynamic duo behind the race is ►Goran Vrus and ►Marko Miličić. Both are full distance finishers with life-long experience in and around triathlon. Goran brings local knowledge as he lives in Poreč and Marko brings his organizational skills from being the Swibir club president and organizing multiple smaller races.

With such know-how and with support with a team of like-minded club members they put on the first edition in 2013. Since then the race has grown rapidly in the number of participants and quality. It has found its place in the regional calendar as a traditional end of season race, as it is run on the second weekend in October. You can participate solo, or as a part of a three members relay.

The course highlights include a swim in crystal clear Adriatic, a rolling bike course and run along the coast and among the famous pine trees. Wetsuits are usually allowed in the swim, but the water still did not lose all the summer heat which makes for a pleasant and fast first portion of the race.

The bike course used to be a lollipop format with a short connection from the T1 to the start of the four laps. This was always a compromise solution reached with local authorities to minimize traffic closures until the race gains popularity. The race’s success means that organizers managed to reach their goal and for the 2018 edition they changed the course.

It is still a lollipop course, but there are only two laps of approximately 20 km with the rest of the distance taken by the connection to the start of the laps near Sveti Lovreč/San Lorenzo. The altitude profile does not feature any significant climbs. This does not mean that it is flat, on the contrary, there are constant ups and downs that the athletes can use to break up the rhythm and take on nutrition.

Run is mostly flat with few minimal undulations. There are four laps. The course takes the triathletes through a hotel complex, under the thick pine trees and their cooler shadow and along the coast with the thought of an after the race a cooldown splash in the sea easing the final part of the race.

The quality of the race was recognized by both Croatian and Slovenian federation as they chose it as their national half distance championship race. Besides cooperating with national federations, the race has great backing from the local hotel chain “Plava Laguna.” They provide great accommodation to the athletes with all the perks that a triathlete needs such as late checkout, bike storage and maybe most importantly – a hotel room just five minutes walk from the swim start.

October is the end of the touristic season in Poreč, and the accommodation is reasonably priced, with prices starting at 28 EUR per person per night for half board in a three-star hotel in a double room, and 35 EUR if you prefer the same arrangement in a four-star hotel. Besides great accommodation and sleeping within walking distance to the transition and the swim start, if you book a room with Plava Laguna organizers will grant you a discount on the starting fee.

The starting fees are grouped in tiers. As each tier sells out the price rises, so it pays off to register early to be among the fifty athletes in the first tier. The fees vary depending on which tier is currently open and if you have a license and/or a promo code from Plava Laguna, so it is best to visit the organizer’s site and check there.

If you are looking for a half distance race to finish your season, and want a race that has excellent organization, great accommodation, sea wetsuit swim with demanding but not crazy hard bike and run course – Poreč Triathlon powered by Plava Laguna is a great option.

Photo gallery from the race: