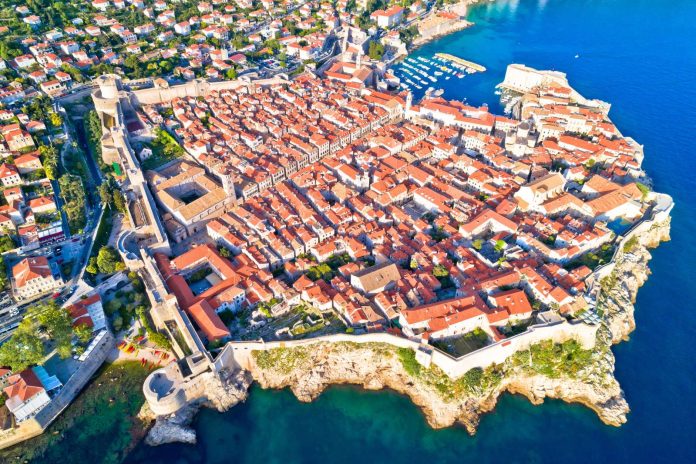 The United Nations Educational, Scientific and Cultural Organization (UNESCO) World Heritage Sites are places of importance to cultural or natural heritage as described in the UNESCO World Heritage Convention, established in 1972.

Currently, there are ten Croatian sites inscribed on the list and 15 sites on the tentative list (considered for nomination). Two of ten protected sites are natural heritage, and the others are cultural heritage. All of them unique and special in their way, and so much worth seeings. Here’s the list.

Over time, water has flown over the natural limestone and chalk, creating natural dams which in turn have created a series of connecting lakes, waterfalls, and caves. The nearby forests are home to bears, wolves, and many rare bird species. The 16 blue-green lakes are absolutely breathtaking, with the colors changing along with the seasons – it is nature at its finest. Plitvice Lakes was the first Croatian site on the list of UNESCO natural heritage (1979).

Behind this long name is old, old part of forest that stretches over much of Europe, with sites in twelve countries. Once covering vast tracts of the European continent, since the last Ice Age, the European beech forests shrunk to the few patches that remain now. This iconic forest type is typical for Europe, and its protection is more critical than ever. In Croatia, you can still find surviving areas of the once-mighty primeval beech forests of Europe in three places: ►Hajdučki i Rožanski kukovi and two areas in North Velebit National Park and ►Paklenica National Park on Velebit mountain.

Historical Complex of ►Split with the Palace of Diocletian

Established as a cultural heritage in 1979, the Historical Complex of Split is a massive 38,500 square meter area of Roman archaeological monuments. Built by the Roman Emperor Diocletian as his retirement palace in 300AD, it later served as the basis of the city of Split. A cathedral was built in the Middle Ages inside the ancient mausoleum, along with churches, fortifications, Gothic and Renaissance palaces. The Baroque style makes up the rest of the area.

►Dubrovnik was once the prosperous Maritime Republic. During the Middle Ages, it became the only eastern Adriatic city-state to rival Venice. Supported by its wealth and skilled diplomacy, the city achieved a remarkable level of development, particularly during the 15th and 16th centuries. Today, Dubrovnik is considered to be the “Pearl of the Adriatic”, which boasts a number of Gothic, Baroque, and Renaissance architectural monuments such as churches, palaces, and monasteries. It is among the best-preserved medieval cities in the world, and the old town showcases the beauty of Croatian culture.

>> Not only you can visit Dubrovnik, you can run Dubrovnik Half Marathon there

Another long name here represents an amazing church in the town of Poreč. The episcopal complex, with its striking mosaics dating back to the 6th century, is one of the best examples of early Byzantine art and architecture in the Mediterranean region and the world. It includes the basilica itself, a sacristy, a baptistery, and the bell tower of the nearby archbishop’s palace. The Episcopal Complex of the Euphrasian Basilica is believed to be one of the founding places of Christianity.

The historic city of ►Trogir

Trogir‘s rich culture was created under the influence of old Greeks, Romans, and Venetians. It is the best-preserved Romanesque-Gothic complex not only in the Adriatic but in all of Central Europe. Trogir’s medieval core, surrounded by walls, comprises a preserved castle and tower and a series of dwellings and palaces from the Romanesque, Gothic, Renaissance, and Baroque periods.

In the city of ►Šibenik, there is a cathedral which is a triple-nave basilica with three apses and a dome which is also one of the most important Renaissance architectural monuments in the eastern Adriatic. Cathedral of Saint James, or Saint Jakov in Croatian, is a magnificent example of a blend of architectural heritage from northern Italy, Tuscany and Dalmatia. The 71 highly individualized exterior frieze of men, women, and children, with different facial expressions, have never been identified and adds a mysterious air to this magnificent structure.

Located at the island of Hvar, the Stari Grad Plain is an agricultural landscape that was set up by the ancient Greek colonists in the 4th century BC and remains in use today. The plain is generally still in its original form. The ancient layout has been preserved by careful maintenance of the stone walls over 24 centuries. Olives and grapes that grow there surely still carry the whiff of those ancient times.

Stećci, or the medieval tombstones, are the monolith stone monuments found in the regions of the present Bosnia and Herzegovina, parts of Croatia, Serbia, and Montenegro. They first appeared in the 12th century and reached their peak in the 14th and 15th century. There are two sites inscribed in Croatia, in ►Dubravka, and in ►Čista Velika. The Stećci feature a broad range of decorative motifs and inscriptions that represent iconographic continuities within medieval Europe as well as locally distinctive traditions. The oldest ones dating to the 1100s, these monolithic tombstones are utterly unique in the world, only found in this relatively small corner of Europe.

Venetian Works of defense between 15th and 17th centuries

This property consists of 15 components of defense works in Italy, Croatia, and Montenegro, spanning more than 1,000 kilometers between the Lombard region of Italy and the eastern Adriatic Coast. The introduction of gunpowder led to significant shifts in military techniques and architecture. Croatian sites include the Defensive System of ►Zadar and St. Nicholas Fortress in Šibenik. To fully understand the might and power of the Venetian Republic in the 1500s and 1600s, it’s important to see how they were able to defend themselves against a large number of enemies and invaders.

There is a lot of sites in Croatia still waiting for the confirmation of UNESCO protection. Some of them are really amazing as well. For example, ►Lubenice – a village at a strategic location on the island of Cres inhabited since the prehistoric era; Castle of Great Tabor; Castle of Old Town in the city of ►Varaždin; Lonjsko Polje Nature Park; then, a historic fortified town on the east coast of the island of ►Korčula; the Blaca Hermitage established in the 16th century by Glagolitic monks…

Croatia is more than just its highly popular island destinations; these UNESCO World Heritage Sites highlight that Croatia is a country filled with historical and cultural heritage as well as outdoor activities to keep you active all-year-round.