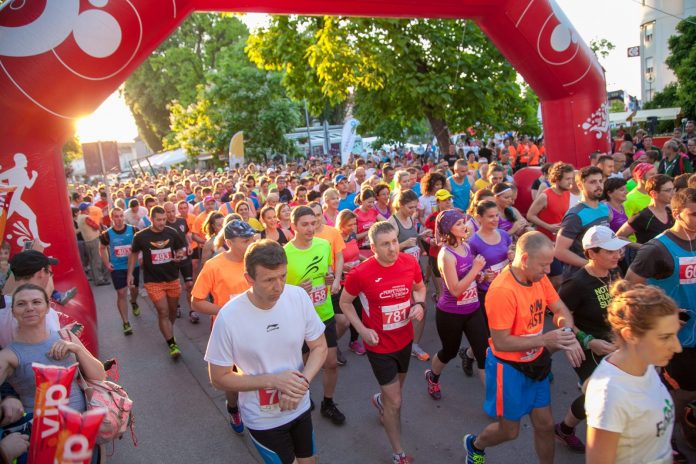 Karlovac 10 K – or Cener, as Croats love to say – is one of the most popular athletic races in Croatia. It is held every year on the evening of the second Friday in June. It runs in the historic center of Karlovac – the famous medieval star – between the two largest Karlovac rivers, Kupa and Korana.

The race in ►Karlovac is fast, and the elites’ field always consists of the fastest Croatian runners as well as many international professional runners. In 2016 on this course, Kenyan runner Hillary Kiptum Maiya Kimaiya ran the fastest 10 K ever on Croatian soil – 29:39. Elite and Citizen race are separated – so you can race with the fastest, or watch them and get motivated for your race.

The course consists of three laps. You can run all three laps (10 K) or one lap (3.3 K) as a member of the relay team of three people. The registration form is here, and at the end of the registrations, the organizer will determine the time limit for participation in the elite race with the maximum number of 80 runners in male and female competition together.

Traditionally, after the race, there is a party for everyone. Rock concert, Karlovačko beer, and tasty food – to celebrate a good race!

Karlovac is situated east-west of Zagreb. You can travel to Karlovac from ►Zagreb by car, bus or train – it’s a one-hour drive.  You can also travel from ►Rijeka, by same means, only a bit longer. If you’re coming by car, you can come from every part of Croatia and upon arrival look for parking spots here. Few hundred meters from there are the train and the bus central stations.

Even though it’s small, Karlovac and its suburban area offer interesting accommodation options. Vintage rural houses, 19th-century hotels, unique hostels and campsites near rivers – there is something for everyone.

Karlovac is the town of parks, rich culture, beer and one of the rare towns that have four rivers flowing through it. The largest one, Kupa, passes through the town center, and Dobra and Korana flow into it. A bit further down, the river Mrežnica flows into Korana. The natural wealth of forests and rivers have left a deep mark in the tradition of the Karlovac region, and its location in central Croatia, at the border between the north and south, has marked its history.

Four beautiful rivers also call you to take a swim – and you surely should, at Foginovo bath resort or somewhere outside the city, where rivers are calm and clear. Exciting green landscapes filled with activities and cultural heritage are a favorite destination for an active vacation. You can choose between cycling, fishing, paintball, horse riding, rafting, hiking, and climbing. Find more information here.

The town was founded as a six-pointed star fortress, and it is an example of unconquerable forts built in the 16th century, and it was named after its founder, Duke Karl from Austria. For those interested in exploring the history of the town, these places should be visited: Dubovac Castle, Katzler Pavilion, the main square with the Franciscan monastery, Vrbanić gardens, Turanj military complex …

Considering all of the above, Karlovac 10 K run sounds like a magnificent opportunity for a nice weekend – come and improve the PB, relax at the river, explore the nature and see some interesting places. Come and try!

Wings for Life Word Run Zadar – run for those who...

Running in Rijeka – where to run