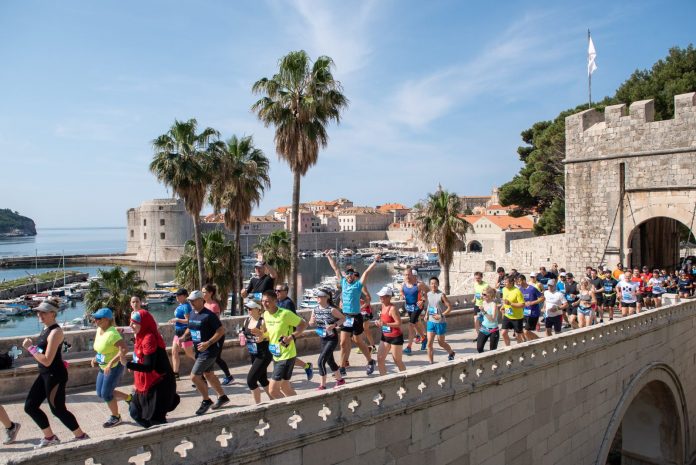 A half marathon is a very popular distance to run and every year there are a lot of new half marathoners. That’s why there are many half marathons in Croatia – some new and exciting, and some with a long tradition behind them. It is up to you to decide when you are coming and to choose which race you want to participate in. We picked and listed some of the best – to be honest, it wasn’t easy!

End of February means Split Half Marathon. This race in the heart of Dalmatia became very popular in the last few years and many runners head there to open their spring season. Split is a lovely city with Mediterranean climate, but nobody can say with certainty what the weather will be like on race day – sometimes it’s a beautiful, sunny day and sometimes it’s snowing. Anyway, it will be an amusing surprise and a good race.

Oh, the springtime in beautiful Zagreb! In March, the Zagreb21 Spring Half Marathon is being held. Although it is still a young race, it’s loved by runners from all over the region. The atmosphere is usually great and the organization is of top quality. Just come and visit sights like the Bundek Lake, National Library, Museum of Contemporary arts, etc. – while on your run.

Slavonia is the easternmost part of Croatia. It is also the flattest part of the country. Osijek, the biggest Slavonian city and the 4th biggest city in Croatia, hosts the half marathon at the beginning of April. The Ferivi Half Marathon is a nice race which starts in the center of Osijek – near the Drava River, and continues across its bridges, the beautiful city core, and parks.

The first Krka Half Marathon was held in 2018. The race immediately became popular among runners – the maximum number of 750 competitors was reached, and a hundred of those runners were foreigners. Beautiful yet challenging, this race doesn’t leave anyone indifferent. Running through the magnificent sceneries of Krka National Park and the near unique natural phenomenon of the Krka River and its wonders is a really special feeling.

Surely the best half marathon in Croatia is the Dubrovnik Half Marathon, which is also the main event at Du Motion – Runners’ Days Dubrovnik. The last weekend in April brings many people in the most popular city of Croatia. This race has an incredible organizing team, a beautiful course, fine spring weather, and a really rich starting package which includes a trip to the island of Lokrum, entrance tickets for museums and city walls, free public transportation, and so on.

The amazing Plitvice Lakes National Park hosts one of the most difficult Croatian half marathons. It is also one of the most beautiful races with lots of greenery. Slightly hilly landscape will make you put extra effort in the race, but its beauty will make all the pain go away. Foreign runners traditionally love this race and a lot of them come to run it on the first weekend of June. After the race, you can relax while strolling through the park and seeing everything you maybe missed during the race.

A flat, fast course in a city which used to be the Croatian capital – if you’re a fan of relaxed and good races, this one is for you. There is no pressure here – you can even sign up just moments before the race. Also, Varaždin is a city with rich history and nice architecture and the weather in mid-September is usually quite suitable for racing. Just come, sign up, run, and enjoy.

Another half marathon held in Zagreb is the one in October, which is a part of the official Zagreb Marathon event. The half marathon is the most popular race of the whole event – a few thousand runners attend it every year. The course is fast and IAAF certified, which means it’s ideal for chasing a new PB.