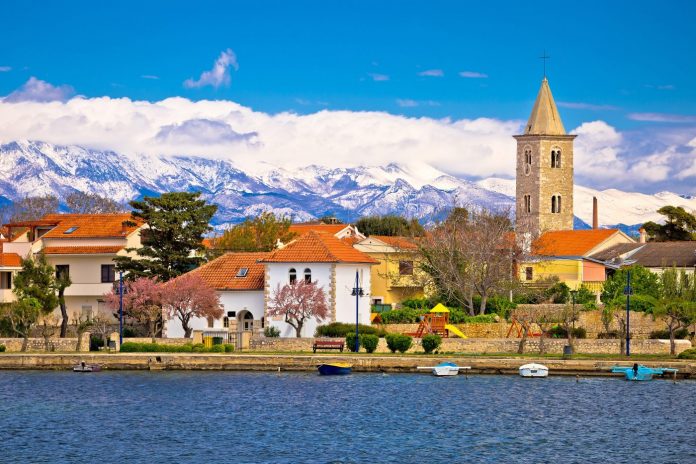 Beautiful sea with thousand islands, stunning mountains, green fields, wide rivers, clear lakes, amazing waterfalls, a jungle and a desert – all in one small country? Yes, you can find all that in Croatia! Given the size, the landscape is diverse and exciting.

Croatia is a small and strangely-shaped country, consisting of two main landmasses – one to the south and west, the other to the north and east – which are only connected by a narrow stretch of territory, less than 50 km wide. Some say that this strange shape looks like a bird or dragon on the fly, with Istria being the head, Dalmatia being the body and continental part being spread wings.

Bordering Slovenia, Hungary, Serbia, Bosnia and Herzegovina, Italy and Montenegro, Croatia is very much a country of southeast Europe. Three geographic features dominate the appearance and nature of Croatia. These are the Adriatic – the sea and the coast, the Dinaric Alps – the mountain chain of moderate height that separates the coastal areas from the continental interior, and the Pannonian Plain – a vast lowland and inland region traversed by major rivers such as the Danube and its tributaries, Sava and Drava.

This is the continental part and the agricultural heart of the country. ►Slavonia, the easternmost part bordering Serbia, Hungary, and Bosnia and Herzegovina, is a green region with a lot of fields and woods, and ►Osijek is the principal city there.

Međimurje (regional: “between the rivers” – ►Drava and ►Mura) makes the north of Croatia. Međimurje is known for the vineyards, hunting grounds, grasslands, and thermal springs. ►Čakovec, a historical town today known for flowers and interesting gastro offers.

Zagorje, or the Croatian Hinterland, is the part north of ►Zagreb and south of ►Varaždin. Those hills are the last fragments of the Alps, now covered with vineyards and orchards. Where Alps end, starts the ►Medvednica mountain.

The rest of continental Croatia goes towards the south, around the city of ►Karlovac, and the Dinaric Alps there make the natural border between the continental and the coastal part of Croatia.

Longest Croatian rivers – Sava, Danube and Kupa flow through this part of the country.

Oh yes – and the desert! The Sands of Đurđevac is an area of partially stabilized dunes in the eastern part of the town of ►Đurđevac, in the north-east of Croatia. The region is sometimes called the Croatian Sahara, or the Bloody Sands.

►Gorski Kotar is a mountain district of Croatia, sometimes called the lungs of the country. Mountains, woods, and wildlife with bears, wolfs and foxes make this part unique, and the main town there is Delnice.

After Gorski Kotar comes ►Lika, a traditional region roughly bounded by the Velebit mountain from the southwest and the Plješevica mountain from the northeast. Lika is a rural area with developed farming and livestock. The industry is minimal and relies mostly on wood processing. The most famous part of Lika is the ►Plitvice Lakes (►Plitvička jezera), and on the Velebit mountain you can find ancient forests – real small jungles – ►Ramino korito, for example.

The last part of the Dinaric Alps is ►Zagora (“behind the hills”), and it’s the part of Dalmatia which isn’t coastal. Karst topography dominates the landscape there, and the land is interspersed with river canyons. The most beautiful is the ►Krka river canyon with its stunning waterfalls.

The most famous part of Croatia is the coast by the Adriatic Sea. The coastline is 1.800 km long and officially recognized as Europe’s second-cleanest (after Cyprus). Croatia’s shores tend to be pebbly rather than sandy. The Adriatic regions are Istria, Kvarner, North Adriatic and Dalmatia.

Istria consists mainly of the Croatian part of the peninsula of Istria. ►Pula – the city with rich Roman heritage – is the largest city there. The geographical features of Istria include the ►Učka mountain ridge, which is the highest portion of the Ćićarija mountain range, four smaller rivers, and the Lim bay. Today, olive oil and the great vine are produced in Istria, and tourism makes a significant role in its economy.

Kvarner is the part around cities of ►Rijeka and ►Crikvenica with islands of ►Krk, ►Cres, ►Lošinj, ►Rab, ►Pag, and many other small islands. ►Rijeka is the most prominent Croatian port, and beside that industry-oriented part, ►Kvarner is one of the favorite regions for tourists.

North Adriatic includes the shore beneath the Velebit mountain, from the town of ►Senj to the town of ►Starigrad. ►Velebit (along the sea, of course) dominates the scenery there, and places are mostly small and picturesque.

Dalmatia is the part of Adriatic from the city of ►Zadar to the city of ►Dubrovnik. The richness of the coastal strip of Dalmatia is 926 islands, islets and sea cliffs. Some of them, like ►Brač, ►Hvar, ►Korčula, ►Dugi Otok and ►Mljet, are among the largest Adriatic islands. The city of Split is the biggest city in Dalmatia, and people of Dalmatia mostly work in tourism, naval professions and cultivation of olives and citrus fruits. Besides the beautiful sea, in Dalmatia, you can also find the biggest Croatian lake – ►Vransko jezero. This lake is actually a karstic field filled with water and a rare example of crypto-depression.

The climate of Croatia

Croatia is divided into two predominant climate regions – Continental and Mediterranean, although there are some variations within those climate zones. As everywhere, Croatia’s climate is determined by its geography, which is characterized by a mixture of mountains, plains, forests, and a long littoral belt.

The Croatian interior, from Karlovac to Slavonia, has the Continental climate. Winters get cold, with the average temperature in January ranging from 0°C to -2°C. In July, the average is approximately 25°C although strong heat waves have become more frequent.

The mountain regions of Croatia are colder and get more precipitation. In winter that means average temperature ranges from -2°C to -4°C and above 1,500 m it is a few degrees colder. Snow is common in the higher elevations, providing Croatia with a ski season. In summer the mountains have a temperature of 10°C – 18°C, which makes them a pleasant escape from the coastal heat.