Home Adventure Via Adriatica Trail, stage 5 – Welcome to the wilderness of Velebit 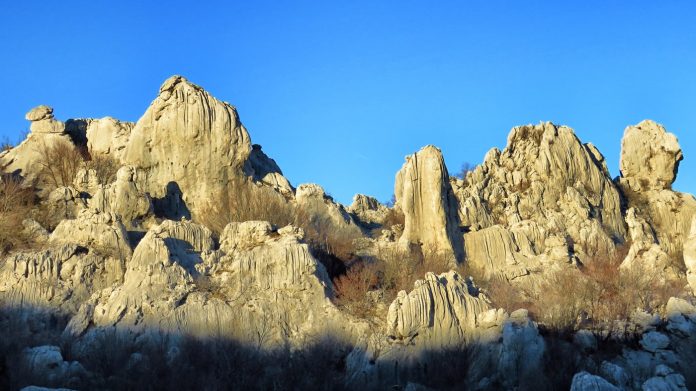 The fifth stage of the Via Adriatica journey leads hikers to remotest, southernmost parts of Velebit. There are peaks that go as high as 1700 meters above sea level and with strange rock formations that have inspired folk fairytales. This area is so impressive that it was used as a filming location for western movies in the 70s.

The start of this 91 km long stage, with more than 5500 meters of climbing, is in Baške Oštarije, a village on the main road which connects the seaside town of Karlobag and Gospić, a town that lies on the other side of the mountain. In Baške Oštarije, there is a modern camping site Velebit and a hostel “Baške Oštarije” where you should load up on supplies for this stage of the journey. Keep in mind that, for the next 90 kilometers, there is no easy way to get extra supplies, so plan accordingly.

The first ten kilometers of the stage will lead you through a small valley. After exiting the shallow wooded valley, the route climbs two 1300 meter peaks and reaches a mountain refuge, Šugarska Duliba. Besides having potable water, the refuge marks the return to the sea-facing side of the mountain.

At the 22nd kilometer of the stage, there is another refuge – Tatekova koliba. Its name, “Daddy’s hut”, comes from the nickname of the hiker that built and furnished it. It is at the bottom of a small valley and has access to potable water from a nearby narrow cave.

From here, the route turns to inland once more and climbs the peak Visočica, which is located at the 30th kilometer of the route. Below the peak, there is a small mountain lodge from which you would need about 20 minutes to reach the peak. You can enjoy an amazing view of the sea on one side and of forests on the continental side from the peak.

From here, you should follow the plateau that will lead you to the refuge Struge, which is located at the 44th kilometer of the route. Here, you can replenish your water supplies from the well near the refuge. After leaving the refuge, for the next ten kilometers, the route climbs a series of peaks that include Vaganski vrh (1757m) and Sveto brdo (1751).

Needless to say, this is one of the highlights of the stage. With breathtaking views and amazing geological features all around, you will remember this part of the route for a long time. While following the crest of the mountain, you can see the famous Paklenica National Park below you, on the right. This national park is renowned for its steep canyons and is a famous free climbing center of the region.

After Sveto Brdo, you descend to the Dušice refuge. The refuge is located near two springs that do not dry out even during hottest summer months. With a little over 30 kilometers to go, this is the highest point until the end of the route. The rest of the stage, excluding the last couple of kilometers, is downhill.

After passing another refuge, Zlatino, you will reach the next highlight of the stage, Tulove Grede. This steep ridge is more than one kilometer long and is well known for its cracked stone towers. It is so impressive that it inspired folk tales involving dragons and fairies. Also, one of the most popular European western film series, Winnetou, was filmed here.

After enjoying Tulove grede, the route reminds the hikers of an unfortunate part of local history. It passes by the front lines of the 1990s war. All of the trails are safe, but the signs warn that there can still be land mines left behind. All of the risk zones are clearly marked and are easily avoidable if you stick to the hiking paths.

After a 10-kilometer descent, the path reaches an asphalted road for the first time since the start of the stage, which was over 80 kilometers ago. Here, it is necessary to stick to the asphalted main road for 6 kilometers. This used to be a main road which connected the inland and the coast, before the construction of the highway. However, there is still traffic here, so make sure to take necessary precautions. At the junction for Golubić, you will reach the end of the fifth stage.

This marks the end of the Velebit stage of the journey and its uninhabited wilderness. But do not worry; the rest of the route is just as beautiful and impressive as this one.