Home Adventure Via Adriatica Trail stage 6 – Out of the mountains and into... 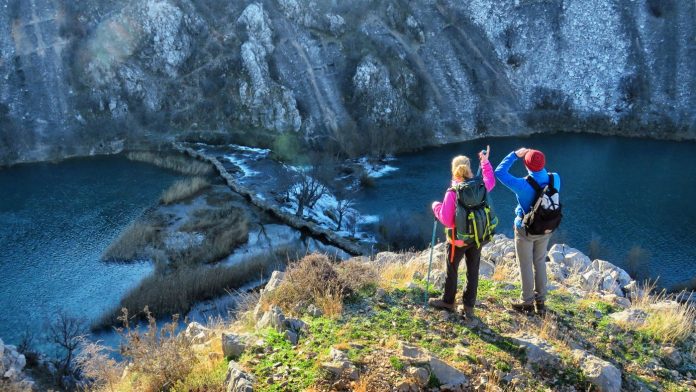 The sixth stage marks roughly the halfway point of Via Adriatica Trail. It leaves behind the Velebit mountain, and after passing through the canyon of the river Krupa, and the spring of the river Zrmanja, the trail reaches Knin, one of few larger towns that Via Adriatica visits.

After passing the highest peaks of Velebit and enjoying the magnificent sea views during the previous stage, the sixth stage takes the hikers inland. There are no peaks over a thousand meters above sea level and no breathtaking sea views. However, this doesn’t mean that this stage is without memorable attractions. The route goes along two rivers, passes an ancient bridge, an Orthodox monastery, the spring of the river Zrmanja and ends in Knin, a regional center.

The route is 74 km long and features 2000 meters of elevation change. The start of the stage is at a crossroads in Prezid, where it leaves the main road and starts descending. After the first 8 kilometers on a tarmac road, you reach the crossroads where the route diverges.

Turn right and before you lies a longer and a more technical option that features one small part that requires climbing a via ferrata. This section requires knowledge of basic alpine techniques. But those that decide to take on this challenge will be rewarded with the crossing of Kudin Bridge. This old bridge was built at the end of the 18th century. The legend has it that a young man created it as a way to reach the love of his life who lived on the other side of the river. Regardless of the legend, the bridge is well worth seeing, and can still be crossed despite being over 300 years old.

If you decide to take the shorter route, you will descend down the canyon after seeing Kudin bridge from the top of the canyon. Along this part of the route, there are also a total of nineteen waterfalls on the river Krupa. After a couple of kilometers, this shorter route descends down the canyon and joins the longer version. The route follows river Krupa for a couple of kilometers until reaching the village of Krupa. Here you are presented with two options. Left option crosses a small creek, while the longer right option, follows a wider gravel road to the village. The options diverge at an Orthodox monastery Krupa. This monastery is even older than the bridge itself. It has been standing here since 1317 and has a valuable collection of frescoes and icons.

The route passes the Krupa village and the spring of the Krupa river and continues climbing up to a grassy plateau called Duboki Dol. After that, the trail serpentines uphill until it reaches the main road connecting Knin and Gračac after 37 kilometers. This is an opportunity to have some supplies delivered.

After 500 meters along the main road Via Adriatica turns left and descends all the way to the spring of river Zrmanja. Here it is only a small spring surfacing from the side of the cliff. But the Zrmanja is famous for its own spectacular canyon further downstream.

With some 40 kilometers left in this stage, the trail leaves the Zrmanja river to the right and starts gently ascending. It reaches a plateau, and via a combination of gravel and tarmac roads reaches the town of Knin where we find the end of the stage.

Since this stage doesn’t cross major mountains, there are no lodges or shelters. Hikers should count on sleeping in tents and are advised to carry enough food for the duration of the whole stage as there are very few open stores where you can restock on food.