Home Adventure Via Adriatica Trail, the second stage – from Rijeka and Roman walls... 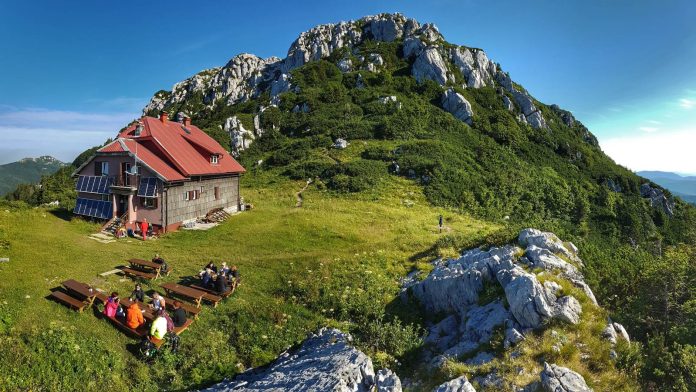 The second stage of the Via Adriatica leads hikers around the big coastal city of Rijeka. Views of the Adriatic Sea, ski slopes, Croatian Alps, Roman border walls, and a national park can all be enjoyed during this stage.

The second stage of Via Adriatica starts from Poklon, located at the border of Istria and Kvarner, and ends at Plas, after 94 kilometers and 3700 meters of climbing. It descends from Učka, the first mountain on the route, down to the small villages near Rijeka, only to climb back up again to several peaks higher than 1000 meters. On the way, it passes through Risnjak National Park and a small ski slope in Platak. At the end, it reaches Plase, a small town just a couple of kilometers from the sea, and a bridge connecting the mainland and island Krk.

Beautiful view of the islands

The first ten kilometers of the stage are on a mostly undulating terrain which follows forest roads and trails. There are two peaks higher than 1000 meters on the route before it descends to the altitude of 300 meters above sea level. From the second peak, Brložnik (1093 meters), you can see a breathtaking panorama of Kvarner Bay on a clear day. On the left, there are mountains that Via Adriatica traverses on its way south. On the right, the Adriatic Sea is littered with islands: Krk, Cres, Lošinj, and behind them in the distance, Rab and Pag.

After the first ten kilometers of rolling terrain, the trail heads downhill. After passing through a dense forest, it reaches small villages that lie next to the highway leading to Slovenia. Being 30 kilometers from the starting point, this is a good place to stock up and even spend the night in private accommodation. The next time you will be able to buy food or sleep with a roof over your head is 30 kilometers away at Platak.

It is time to start climbing. In the middle of the forest that separates sleepy villages, you can find Šparožna špilja – a cave that was home to bears more than 15.000 years ago is open for visit. It is 540 meters long and has halls up to 12 meters tall. After Šparožna špilja, you leave Studena, the last village, behind and enter Grobnik Alps. This is considered to be the last mountain part of the famous mountain range that begins all the way in France.

The borders between Roman provinces passed through here in the 3rd century AD. The remains of the stone walls marking the border or Limes, as it was called, can still be seen along the route. This was once an administrative border, but to this day it remains a geographical and climatological one. After passing by the picturesque Hahlic mountain lodge, situated in the middle of the forest, the route leads towards Platak and  Risnjak National Park.

On the ski slopes

Ski center Platak is a great example of what happens when mountains and sea meet. It is less than a half an hour drive from the seaside. Here you can ski in the winter, and in the summer, you can enjoy forest trails and cool air. There are two mountain lodges that offer accommodation in Platak, usually known as Small Home and Big Home. Besides lodging, it is also possible to stock up on supplies.

Platak marks the beginning of the last third of the stage. With a little more than 30 kilometers left until the end of the stage, the trail leads through the National Park Risnjak. This is one of the least visited Croatian national parks. It is the wildest and not near any big traffic arteries, but due to its diverse vegetation and lush forests, it is a wonderful place to visit. Via Adriatica visits only a part of the park. However, this short traverse is enough to enjoy the variety of vegetation and geological formations that made this area a national park. Below the highest peak of the national park sits “Schlosserov dom” lodge. The peak is called Veliki Risnjak and sits at 1528 meters above sea level.

And down we go

After offering stunning views from the peak, Via Adriatica starts descending towards the Adriatic. Little more than 10 kilometers from Plese, and the end of the stage, there is a last chance to rest, replenish the supplies, or sleep over at Lepenica lodge. Lepenica is a scouts’ lodge and, with a small creek running beside it, it looks like it came straight from a fairy tale.

Now there is only one peak left to climb. Tuhobić stands at 1109 meters and offers great views of the island Krk. From the top, there are 8 kilometers of descent down to the small village of Plase, which marks the end of the stage.

Looking for adventure? Come to Croatia!