Home Adventure Via Adriatica, stage 4 – a balcony view over the Adriatic 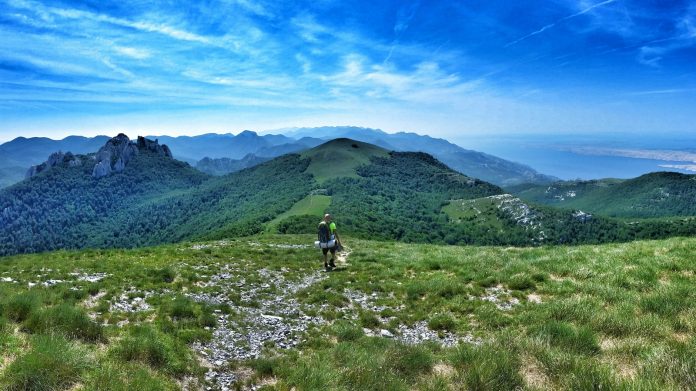 Besides being 59 kilometers long and having 2400 meters of elevation gain, two more numbers characterize the fourth stage of Via Adriatica. The first one is number five: the furthest distance, in kilometers, between the sea and the route. The second one is one thousand: the lowest altitude on the route, in meters above sea level. Having the Adriatic on the palm of your hand is an understatement.

Velebit, the main highlight of the stage, is a mountain like no other. It rises steeply from the sea, leaving enough space for only a couple of seaside towns that lie below. It is a mountain of contrast – grey rock on the Adriatic side and lush green pastures and forests on the continental side; warm sun and short sleeves in the afternoon and snow and a winter jacket in the evening; the sea on the right and the continent on the left.

All alone on the mythical mountain

One thing that is constant on this stage is a lack of civilization. There are a couple of mountain huts, several shelters, and not much else manmade in these 59 kilometers. In total, there are nine mountain shelters along the route, two of which, Zavižan and Alan, offer food and beverages. Bear in mind that Alan is not open all year round. There are no shops or stores where you can buy provisions. You eat what you carry with you and drink from natural springs along the way or take water from the shelters. This remoteness requires additional preparation and caution. You need to plan ahead your food and water consumption, take into account the weather, and have respect for the wildlife.

The second thing that is constant is the breathtaking scenery. Nature here is untouched. There are green meadows, lush forests, rocky peaks, and of course, the blue Adriatic, with its islands as a backdrop. Being on the mountain, with the sea just below you, is an unforgettable experience. Make sure to bring enough memory cards for your camera.

The stage starts from Oltari. After only 4 kilometers, you will reach the entrance to the National Park Northern Velebit. To enter the national park, you will need to buy a ticket. The price is 45.00 kunas and it is valid for three days. Three kilometers away from the park’s entrance, you will reach the highest point of the stage, Zavižan. At an altitude just shy of 1600 meters, there is a famous lodge where you can sleep, eat, and stock up for the next leg of the journey. Next to the lodge is the well-known meteorological station, which recorded several of Croatian weather records, acting as a reminder of the ever changing and unpredictable weather conditions in the area.

After leaving Zavižan, there are two options to choose from: the shorter Premužić trail and a longer trail that faces the sea. The Premužić trail is one of the most well-known hiking trails in Croatia. The other variant involves traversing a wilder terrain overlooking the sea and is recommended to hikers that have already hiked the Premužić trail.

The Premužić trail passes through two strict nature reservations, Hajdučki kukovi and Rožanski kukovi. These two are listed as a UNESCO world heritage site as one of the Primeval Beech Forests. Other highlights include several caves, the best know being Luka’s Cave. With the depth of more than 1400 meters, it is among 15 deepest caves in the world.

The two variants of the trail join, with some 35 kilometers to go, in a small village, Kosica, where you can have supplies delivered. After that, you will continue southeast along the trail until you reach Baške Oštarije, which is situated on the main road that connects the seaside town of Karlobag with Gospić in the inland. The fourth stage ends here. Hikers can rest, restock, and prepare for the next stage that will show them the beauty of the southern part of Velebit.