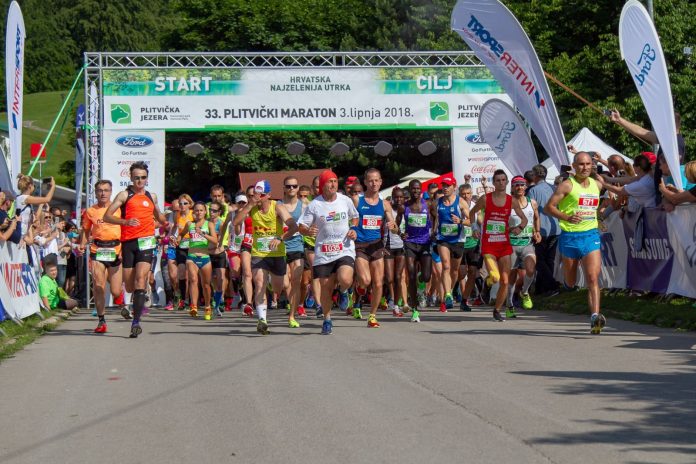 Being a geographically diverse country, it would be a pity for Croatia to limit its marathon races to the city’s asphalt. That is why, like the country’s geography, Croatian marathon offer is colorful – you can run 42.195 meters in big cities, but also in national parks protected by UNESCO.

A typical city marathon, and the most popular one, is the Zagreb Marathon, where you can see the Croatian capital as a cultural monument and an urban jungle. You can experience the towns somewhat southwest in a similar way – with the exception of Rijeka, Crikvenica, and Ston, which all have beautiful seascapes and amazing nature surrounding them, making them less of an urban jungle. There is another marathon held in Zagreb that gives the capital a romantic appeal and provides a stunning aquatic landscape – the GRAWE Noćni Marathon. The route of the marathon follows a river and passes by a lake, but what makes it unique is that it is run at night.

When it comes to marathons in which participants are mostly running on asphalt, the only historical remains that can be seen are cultural monuments and rural landscapes. However, there is an abundance of nature and water scenery to be seen while running STONe Wall and Plitvice Lakes marathons.

Last but not least, there are also marathons in which you can expect complete wilderness – dirt roads, ascensions, climbing, and uphill running… Ok, there is also some downhill running; and truly breathtaking nature and impressive cultural monuments. Of course, we are talking about the Sljeme Marathon, but there is one more, only a baby – the Papuk Marathon.

The date of this year’s Rijeka Marathon is April 14th. This will be the 4th  Rijeka Marathon and it is organized as a part of the “Homo si teć” festival (Let’s all run). The festival has been continuously held since 1998 and is the largest street sporting event in Croatia. During three weeks, besides the marathon,  the festival offers eight races and other events including a half marathon, a half-marathon relay (3×7), a citizen’s race, Trsat’s stair climbing race “539 skok” (539 Jump),  the “Molo Longo trk“, in which a breakwater and the most famous promenade in Rijeka become a trail for an impressive six kilometer race, and others. The start and the finish line of the marathon are at Rijeka’s Korzo (promenade), but the new track is yet to be published . More about the Marathon can be found here.

A total opposite of the Zagreb Marathon is the Plitvice Lakes Marathon. Although it is held during the boiling hot summer atmosphere, there is shade and greenery of the forest and the breeze of nearby lakes of National Park Plitvice. The 34th race in a row is scheduled for June 2nd 2019. One can choose between a full-length marathon, a half marathon, and a five-kilometer race. Last year’s marathon was completed by 326 runners, while the half marathon was completed by over 700 of them. Plitvice Lakes is a very tricky marathon. The reason is that the first half of the road is downhill and the runners experiencing adrenalin rush run too fast, so when they reach the second half, which is uphill, tired feet become disobedient. Read more about this marathon here.

Some like to say that Slavonia is flat. But, from this flat continental region of Croatia rises the Papuk Mountain. Here, another marathon pretty similar to the Sljemenski one is held – the trail concept, a difficult mountain route, and summertime all make these marathons so similar. The first Papučki marathon was held in June 2018 and we hope it will go on. The route starts with a quite steep climb at Orahovica Lake and then passes through Ružica grad and Stari grad. It ends at the foot of peak Kapovac, making this race a real challenge even for masochistic runners. The first part of the marathon, the half marathon, and the 10K vertical, requires one to overcome a 450-meter-high climb within five kilometers. But don’t worry, it’s pretty much running after that… more or less.

“Sljemenski” is the oldest Croatian trail race. Its only connection with the Zagreb Marathon is that it is held above Zagreb, on Sljeme, the highest peak of the Medvednica Mountain. Given the season in which the race is held and the forest environment, this race has more similarities with the Plitvice Marathon than with the Zagreb Marathon. However, asphalted roads make up for just a part of the track, while at Plitvice Lakes they are in the entirety of the race. Most of the trails of the Sljemenski Marathon consist of forest roads and paths. A real delicacy is the section with 500 rocky stairs, called Horvatove stube. The race is held in July, the track is pretty difficult, and the sayings are “Where the wild hogs go” and “The dark side of Sljeme”. The distances are 14 km, 28 km, and 42 km (one lap, two laps, or three laps). Finisher medals are quite unique, which is reason enough to participate in the race. More information can be found on their web page. We also wrote about the Sljemenski Marathon in our article about most popular Croatian trail races.

In a romantic atmosphere of a summer night, AK Sljeme offers one more race in the Croatian capital. This time, it is at the point where Zagreb is split in half by the Sava River. This event provides options of running from one to four circles around the river and over its banks and bridges. There are the ¼, ½, and ¾ races as well as the full length marathon. The races start from the Bundek Lake. The route follows along the coast of the lake, around a park, and along the riverside of Sava. In this romantic, hot night at the end of August, the runners are led by lights of hundreds of small candles placed along the way and lighting bracelets included in the start pack. We recommend you choose Grawe as your first race, or perhaps encourage your mother or a friend to start with it, and sign up for a 1/10 race of four kilometers around the lake. See more in our article.

We’ve all heard about the Great Wall Marathon in China, where participants run on one of mankind’s greatest monuments. Not to blow our own trumpet, but we have a prize horse of our own. Or better yet, a wall. It’s not as long as the Great Wall of China, but it’s the longest fortified wall in Europe and its really challenging. You can choose to run Rocky 4K, Stone 15K or Rockwill 42K. In each of these races you will find yourself in front of the Wall – at least at the start of the race. And be warned, it is not a piece of cake. You will have to climb its steep steps from Mali Ston up to stone towers and fortresses. But at the top, you can expect a view that will literally take your breath away. From the top, you can see the oldest European salt work, vast green fields, and the bluest sea on the planet. Race day is sometime at the end of September, the starting line is in the town of Ston, and the level of difficulty is… huh, let’s just quote the organizers: “Run this saucy marathon with a grain of salt. You may forget the result, but you will remember Ston forever!”

Istrian Wine Run is a running event known for its totally crazy etno-gastro party, no matter the race you chose – a marathon, a half marathon, or a 6K. While running along the route, competitors come across several wine cellars and a number of refreshing points where they are able to taste great wines of Istrian winemakers. Also, runners will be animated by different musical entertainers along the route, from the start to the finishing point. An interesting characteristic of this race is the possibility of disguising yourself. Therefore, choose a creative and original mask because it may be awarded as the best. The winners of the marathon, both in men’s and women’s category, are awarded with the quantity of wine corresponding to their own weight. We believe it will be worthwhile to mark 7 September 2019 in your calendars just for this event.

The Zagreb Marathon race is the best way to get to know the capital city of Croatia. The race starts at Zagreb’s main square, Jelačić plac, and leads through the streets of Zagreb’s center area. In addition to the 42 kilometers marathon, you can choose between a half marathon and a five-kilometer race. As the Zagreb Marathon is always held in October, you can expect whimsical autumn weather in all of its glory – it is usually cold, gray, and rainy, although sometimes it can be a warm and sunny day, as it was last year. The 28th Zagreb Marathon is scheduled for 13 October 2019. Unfortunately, we still can’t tell you the weather. Read more on our website.

The last marathon of the year is the Adria Advent Run Marathon. However, it is rarely in true winter and snowy environment because it is held in Crikvenica, a town on the Croatian coast. It is held in early December and is unique as it is the only professional international marathon in Europe in which competitors run along the seashore. You can choose between three lengths – 42 kilometers, 21 kilometers, and 5 kilometers; and run into the New Year.