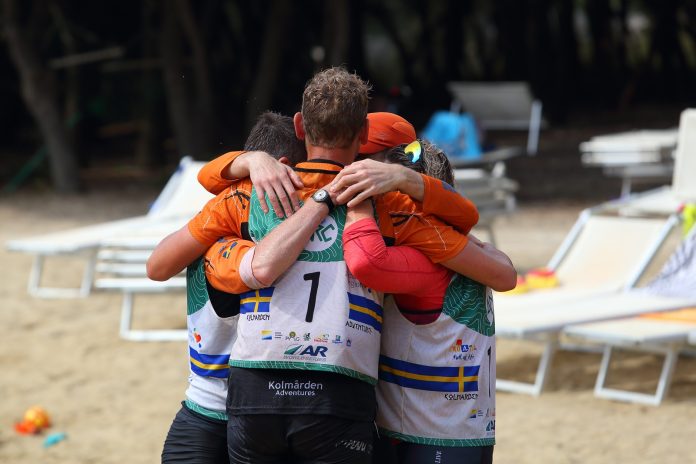 Adventure race Croatia is a race in which teams of four need to cover 350 km by mountain biking, paddling, running, roping and navigating. Hard but exciting, this race is qualifying race for AR World Series. Here’s a little report from the 2018 edition.

The race started on Thursday, 19 September at 8 PM at the central square of Nin, where 20 mixed four-member teams from ten European countries and Australia set out on a 350 km long adventure through beautiful, but technically demanding karst wastelands of the Zadar County.

French team was the fastest

After almost three nights and two days of non-stop running, orienteering, cycling, paddling, climbing or descending ropes, and even caving, Sam Hubert, Clement Eldin, Stephanie Bianchi and Julien David Barranger from Ertips France crossed the finish line tired but happy: “We just wanted to finish the race at our own pace, taking care of all the team members, with easy transitions and enough rest”, said Sam Hubert at the finish line. They finished the race in 56 hours and 6 minutes after conquering more than 350 km of very tough and beautiful trail. They confirmed their status of favorites by paddling across the finish line in Petrčane almost five hours ahead of the second team.

The only adventure race in Europe

ARC 2018 is part of the Adventure Racing World Series, as one of only four this year’s demo races and the only one in Europe. The first edition of the race was a huge success, surpassing the expectations of organizers and participants alike. The official referee of the race, Lars Bukkehave from Denmark was very pleased with the organization and predicts a great future for adventure racing in Croatia: “You did a great job, on a very demanding course. The trekking sections of the race are among Europe’s toughest, with creatively and professionally planned route and check points. This race represents Croatia in a great way, you have all the right reasons to be proud of your achievement.”

The Croatian National Tourist Board has also supported the ARC, recognizing its value as a fantastic global promoter of Croatia. “As former athlete, I am very proud to see new generations of athletes organizing fantastic sport events such as this race”, said Dubravko Šimenc from National Tourist Board. At the awarding ceremony, he called upon all the contestants to spread the word of Croatia’s beauty across the world.

Maybe the best description of ARC was given by Alberto Roca, former World Champion and member of the 4th ranked team Travelindonesia Asia: “If something is called and adventure race, then it has to be an adventure. Adventure Race Croatia certainly is.”

ARC 2018 was just the first edition of this race, but the organizers hope it would become a full ARWS race in 2019 and eventually the venue of Adventure Racing World Championship.