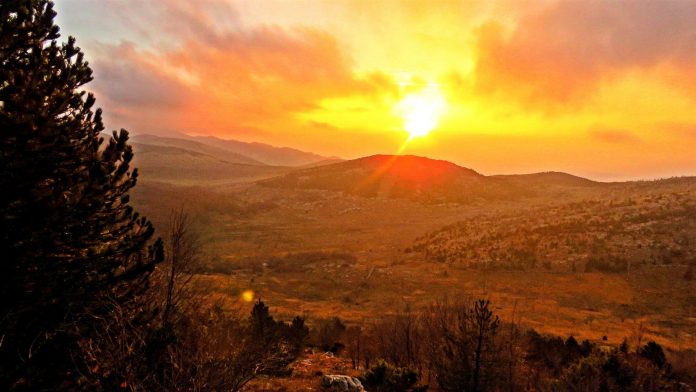 The third stage of the epic Via Adriatica journey is 78 kilometers long and rises up to 2400 meters above sea level. After the first two stages that passed by two big cities (Pula and Rijeka), this stage will give you a taste of the Croatian rural areas. Here, the trail designers had no problem avoiding major asphalt roads. On the contrary – the problem was choosing which trails to take. While there are no prominent peaks along the way, the trail still offers great views and stunning nature.

The stage starts at the Plaše rail station, where the second stage ended. The beginning of the stage is characterized by gentle slopes and the trail leads hikers through a wooded terrain. After only 8 kilometers, you will reach the Mahavica viewpoint. This kind of view is one of the reasons why Via Adriatica is unique. A mountain drops precipitously into the sea, creating an unforgettable view. There are views of the Učka mouintain, by which the trail passed in the first stage, several islands, the sea, the lake Tribaljsko right beneath you, and the mighty Northern Velebit that looms on your left.

After leaving the viewpoint, you will reach the highest point of the stage – Zagradski vrh (1178 m). After descending from the peak, you will reach House Vagabund. With some 30 kilometers covered, this is a good place to rest and stock up (if you want to take a break there, contact them on 00385 51 248 708 or 00385 98 943 2885). Vagabund owners are specialized in catering to hikers’ needs so you can get everything you need, rest, and continue your journey.

After leaving the rest house, the trail continues its journey south with a combination of forest gravel roads and hiking paths. It passes yet another peak over 1000 meters, Veliki Rujnik. After a short descent, there is another chance to get some supplies delivered in a small village, Breze, as the route does not pass through any villages, nor does it cross any roads, for the next 20 kilometers.

The trail here is set between rocky terrain on the right, which plunges towards the sea, and forests of the continental part of Croatia. There are no demanding hills or climbs on this part of the route. Keeping things interesting is your faithful companion, the blue Adriatic Sea, and islands of Krk, Cres, and Rab, that seem to be just a stone throw away.

All the way to the Wrong Way

Some 40 kilometers from the start of the stage, there are two options to choose from. The right path is a more conservative and longer route, with gravel roads on the side of the mountain. If you take the left one, you will conquer Alino Bilo – another addition to your peak collection. The two options merge just before reaching Krivi Put (funny thing: this translates as “Wrong Way”), a village with a shelter for hikers where you can rest (contact: 00385 98 755 200). There are limited facilities in the shelter, so it is better to have stocks and supplies delivered or to ask for help from the locals.

From Krivi Put, the trail follows local roads and descends slowly towards a major road which connects the coastal town of Senj with the inland. The trail reaches the main road ten kilometers away from Krivi Put. The road follows a natural canyon that channels some of the strongest Bora winds in the whole Adriatic. This wind is one of the features of Via Adriatica that is best left undiscovered as it can start suddenly, bringing cold air from the inland. During winter in Senj, it can blow for four days at the speed of over 100 km/h.

Immediately after crossing the road, Via Adriatica returns to hiking paths and starts ascending. The last 15 kilometers of the stage serve as the introduction to Velebit, the most famous mountain on the trail. In the next couple of hundred kilometers, you will meet this Croatian giant and find out why there are so many people returning there on every possible occasion.

The end of the stage is in the village Oltari. Here, you can get your supplies delivered, rest in the mountain shelter (contact: 00385 95 909 7245), and prepare to enter the National Park North Velebit, which is the highlight of the next, fourth stage of Via Adriatica.