Home Adventure The first stage of the Via Adriatica Trail – from dinosaur footsteps... 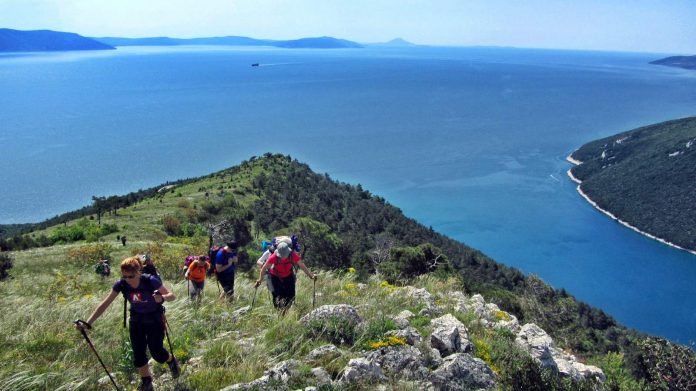 The opening stage of Croatia’s first long-distance hiking trail takes hikers through the eastern coast of Istria. This is a stage marked by history. From dinosaur footsteps and Roman settlements to Austro-Hungarian viewpoints, this stage reflects the rich and varied history of the land it traverses. But it is not just an open-air museum. With fjords, river valleys, sea beaches, and the highest point of almost 1400 meters, all in 96 kilometers, there is plenty to see and experience.

The starting point of the first stage of Via Adriatica is at Cape Kamenjak, on the outskirts of Pula. The start of the 96-kilometer long stage is uncharacteristic for Via Adriatica. There is not a mountain in sight and Pula, one of the major Croatian cities, is just a few kilometers away. The route exits the city immediately and reaches cape Grakalovac. Not to be missed are the 90 million-year-old dinosaur footsteps set in stone right next to the beach.

Ancient history on the trail

After another 25 kilometers of following the shore, there is an archeological park with the remains of the oldest settlement in Istria. Nesactium was inhabited in prehistoric times. Later, the Romans built a thermae and three temples there. The remains of these buildings can still be seen today.

Being 40 kilometers from the start, this is a good place to start looking for a place to spend the night. There are several private apartments available for rent in villages along the route: Valtura, at 42 km from the start, and Mutvoran, at 48 km from the start. During this part of the stage, before reaching Plomin, there are numerous opportunities to fill up with water and food. There are small shops and caffe bars, and, if in need, you can ask local residents for water.

A walk to the hills

With the passing of the kilometers, the terrain becomes hilly, but the roads and trails are suitable for hikers of all abilities. There are several small villages along the way where you can resupply with water and buy food. After the descent to the river and town of Raša, the first serious climb of the stage leads up to Labin. Labin used to be a mining town and has quite a rebellious history. Even Roman texts describe the inhabitants as pirates. In more recent years, in 1921, miners created what is believed to be the world’s first anti-fascist rebellion. Even today, Labin retains its independent nature by hosting numerous galleries and ateliers.

… and back to civilization

Labin is located 76 km from the start and is a good place to look for overnight accommodation. There is a hiker’s lodge Skitača (091/50-24-486). It is about 12 km away from Labin, but is intended for hikers and mountaineers. There are no fixed opening hours, so check in advance for availability. Besides that, there is ample private accommodation in Labin and Rabac. Both are tourist hot spots, so be sure to check availability in advance.

At the end of a short descent from the old mining town at the top of the hill, the trail passes above a modern tourist center Rabac and heads towards Plomin. This marks the last village until the end of the stage is reached. Be sure to get enough supplies to be self-sustainable for the next 25 km. On the mountain, there is only the Babin grob shelter (091/91-41-267) with limited capacity. Most hikers use their tents for the first time here. Note that there are no natural springs with potable water along the route.

Conquer the very first mountain on the Via Adriatica Trail

Učka is the first mountain on the route with the peak Vojak standing at 1394 meters above sea level. On the peak, there is a view point built by the Austro-Hungarians. On clear days, the view is magnificent. One can see the islands Cres and Krk, Istrian hills, Slovenian and Italian Alps, and in the end, Rijeka, above which the Via Adriatica leads in southern direction.

Leaving Vojak, the next stop is Poklon (922 meters above sea level) where the first stage ends. Here you can sleep in the Mountain lodge Poklon (091/20-20-767) or in the Restaurant and Pansion Učka. As the main road passes through here, it is also a convenient place to get supplies and meet up with the support crew.

This marks the end of the first stage. Once you pass Poklon, you will exit Istria. The peninsula has a rich and long history, and beautiful and varied nature and culture. It is a perfect start to your journey as the following stages will be just as beautiful and diverse as this one.