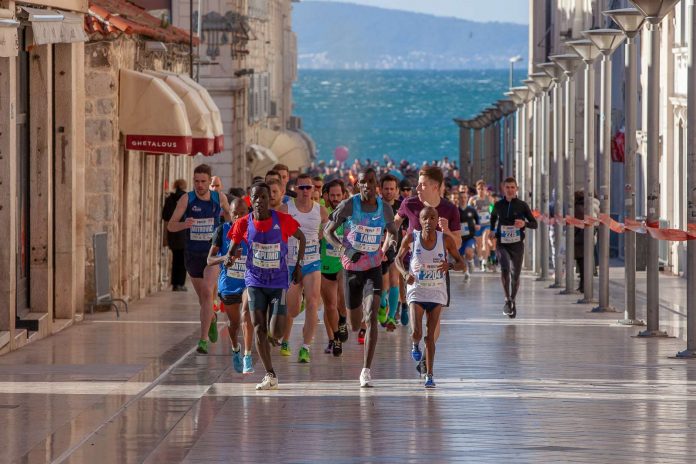 The Split Half Marathon was held on Sunday for the final, 19th time. However, it’s only because, as of next year, the event is evolving into a marathon. Including the word “extreme” in the name of the marathon might be a good idea, as those were the weather conditions under which the half marathon was ran for the past two years – last year the runners faced snow, while this year they had to deal with gusts of wind from the bora hurricane. However, this did not prevent about 2500 running enthusiasts from coming to the

starting point on the Split Promenade and defeating the bora.

In the days preceding the big event, it was quite chaotic and questionable whether Split would even remain on its foundations. The bora of the century – that’s how they called it. On Friday night and early Saturday morning, the town under Marjan, and Marjan as well, was under hurricane force gusts of wind from the bora. The bora had relentlessly ravaged everything in its way, pulling out trees and breaking branches. However, an excellent organization did not disappoint, and Marjan was cleared in time for the Sunday’s race.

The runners defied the bora that challenged them

On Saturday, the weather conditions calmed down, so the “DM Children’s Mile” race was held as an introduction to the entire event. Bora winds did not prevent hundreds of brave little boys from running down the Split Promenade.

Even though Sunday was sunny, strong bora winds were still blowing. Therefore, it was rather difficult at the starting point, on the open sections of the track, and especially in the port of Lora where there were very strong gusts of wind. This made the race more difficult, but the sea scenery and excellent organization helped more than 2000 half marathon runners to regain their bravado and enjoy this special and charming race.

Many respected participants and over  1,000 foreigners made the event even more attractive. In addition to the acknowledged names from Kenya and Ethiopia, who have occupied almost all 21K races’ top ranks, this year’s edition of the race was also marked by some well-known names from politics.

Namely, along with Split’s mayor Andro Krstulović Opara, who ran the 5 K race, the president of neighboring Slovenia, Borut Pahor, also participated in the Split Half Marathon. As a true Slovenian, this half marathon is just one of many in his racing career. Although these officials did not compete for the winner medals, they were awarded beautiful, big finisher medals, as did the rest of the participants.

The Kenyans occupied the top three spots among men, while Ethiopian women dominated

Domestic male competitors did not stand a chance against Kenyan guests. It was a tight competition among three of them as seconds determined the winner. Samuel Naibei Kiplimo won by completing the race in 1:04:07 hours. Twenty-eight seconds later, he was followed by Joel Maina Mwangi. Two seconds after that, Evans Tanui Kipngetich crossed the finish line. It took four more minutes for the “slower” Kenyan Benard Mathejka Muinda to reach the finish line. However, he lost the fourth position to a Hungarian, Gregor László, who finished six seconds before him.

The winner, Samuel Naibei Kiplimo, was satisfied with the race and its amazing organization and track and announced that he might be returning next year.

– It was very difficult for me. I was hoping to set a record, but the wind was so powerful that it pushed us from left to right, so we were running zigzag the entire time. My colleagues from Kenya and I are not used to running in such a cold wind, but I kept encouraging them the entire time to stay strong ” Kiplimo, who finished the race in just over an hour, told the media.

Still, among 1278 men, Croats didn’t do badly either. Goran Grdenić was the first Croat to cross the finish line, completing the race in 1:12:49 hours and thus occupying the seventh spot. Eight seconds later, he was followed by Antun Rudolf Pavelić.  As the third one among the Croats, and the tenth overall, Domagoj Jakopović finished the race in 1:14:13 hours.

Among 602 women, Croatian women faced strong competitors. The domestic competitor from Split succeeded in securing a spot at the pedestal. Even though Ethiopian women won first and second place, a few minutes after them, Nikolina Šustić crossed the finish line. Buzuayeh Mohamed Ahmed finished the Split half marathon in 1:13:19 hours and her colleague Genet Gashie Beyene was only eight seconds behind, while Split native, Nikolina, the 100km world champion, finished the 21-kilometer long track in 1:18:58 hours. Even though Nikolina finished the race in third place, she was the first Croat to cross the finish line. The second and third places among Croatian runners occupy Jasmina Ilijaš and Ines Jozić. They crossed the finish line six minutes after Nikolina, with only six seconds of difference between them.

The Half Marathon also had a relay race in three categories – female, male, and mixed, with three members per team. Among 26 female teams, the best one was the German ECB Running Section Team 1, which finished the race in 1:44:57 hours. Following them were the Powerpuff Girls, with 1:53:40 hours, and Spiders, with 2:01:32 hours. Seventeen teams competed in the men’s group. The team Sadness from the South excelled as they finished the race in 1:18:52 hours. The second position was occupied by the PloChallenge Ploče team which finished in 1:21:27 hours. The last team member of the team Lazar crossed the finish line at 1:32:57. Among the 31 mixed teams, the first were the Viruses (1:36:51), then the Sarajevo Smogovci (1:37:14), and the third were the Zagreb Runners (1:41:59).

161 women and 127 men competed in the 5K citizens race. The best among them received the “Slobodna Dalmacija Trophy “. These were Ivona Zemunik and Riyadh Musić (BiH), although the competition was very uncertain in both categories, especially the men’s. Kristijan Rubinić and Montenegrin Miloš – Mikser Mikić finished the race in 16:40 minutes, with only a few hundredths of a second determining the winner.

After Ivona, who needed 18:25 minutes to complete the race, Lucija Kimani finished the race 17 seconds later, with Alma Hrnjić from Bosnia and Herzegovina less than two seconds behind her.