Home Running Places Running in Zagreb, capital of Croatia – where to run 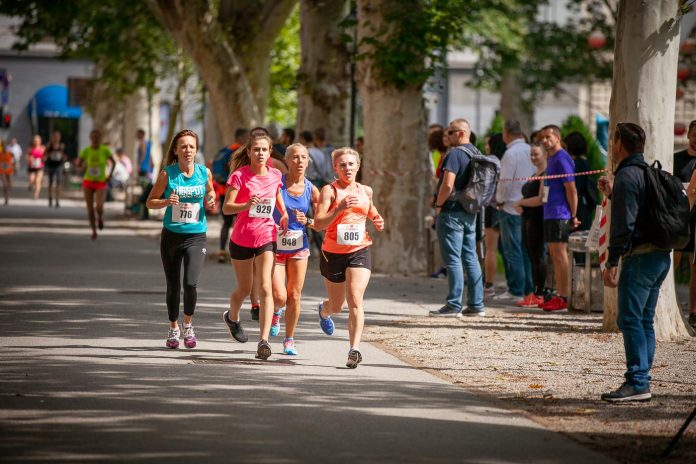 Placed at the southern foothill of the Medvednica mountain and founded in the 11th century, Zagreb is the biggest Croatian city. It has over a million residents, and it’s very safe and friendly to live in. In Zagreb, you can find a river, three lakes, a forest, and a mountain, which are all great places to run.

Running gained big popularity in ►Zagreb in the past few years, so now you can easily meet runners everywhere in the city. You will find most of them at ►Jarun lake, in the ►Maksimir park forest, and on the ►Sava river bank.

Jarun Lake is placed in the south-west part of the city. There is a 6K long route around the lake, and you can run on the road or the grass. It has two peninsulas, and if you add them to your route, it will count 10K. There are few toilets and water pipes along the route and cafe bars that allows you to change in their bathrooms. The easiest way to come to Jarun is to take tram no. 5 or 17 to the station called Staglisce and then take a few minutes walk down the Hrgovici street that leads you to the lake.

Sava river “divides” Zagreb into two parts – old Zagreb north of the river and new Zagreb south of the river. There are three bridges that cross the river, and you can run on the one side of the river bank and then cross the bridge to get to the other side and make a lap. If you choose to run across one of the outer bridges and the middle one, you’ll get a 5K route, and if you choose to run across both outer bridges, you’ll get an 8.5K route. And then you can combine it in any way you want. You can also combine one-mile long route around ►Bundek Lake in your run because the lake is close to the bank. There are many ways to come there, and one of them is to take trams no. 4 or 7 to the Savski most station – that station is placed at one of the three bridges.

Of course, many runners run through the city – and you can do that too. In a short shakeout run through the center, you can sightsee some nice places like National Teathre, medieval parts, cathedral, Zrinjevac park, Ribnjak park…

Maksimir park-forest is located just a few tram stations eastern of the city center. It’s more like a park than like a real forest because it has nice and clean paths and single tracks. Maksimir has six small lakes all over it, and you can see ducks and swans swimming there. And about routes: there are so many paths, and you can combine them in numerous ways and create a route for yourself that is from two to twenty-two kilometers long. You can get to Maksimir by trams no. 4, 5, 7, 11 and 12 – exit the tram at the Bukovacka station and head to the stadium. Just across the stadium, you’ll see a big and beautiful entrance to the park.

If you are a fan of trail running, ►Medvednica mountain is the right place for you. There you can wander free on many marked forest trails, breath fresh air and enjoy nature. You can come to the foothill with tram no. 15 – exit at the last station, called Tunel. There starts the Leustek Trail which is 7K long – run up to the top, eat a strudel or a germknödel in a small restaurant, take a panoramic view of the city and run down the same way. That is just one in the sea of possibilities at this cute little mountain of Zagreb.

Who to run with

If you’re looking for a company, there is a team you can always join for the run. They are called Zagreb Runners, and they aren’t a club but rather a running crew – the big bunch of positive people that runs together, has fun, travels, explores Zagreb and much more. They have their organized workouts on Mondays, Wednesdays, and Saturdays, and they often go together to the Sljeme top on Sunday mornings. If you come to Zagreb, you can send them a message on Facebook to ask for details and go running with them.

For those who in need for speed there are several track and field running tracks in Zagreb, but two of them are most popular – ►Svetice and ►Mladost. Svetice track is placed near the football stadium, and you can come to it same as it’s described earlier for Maksimir, only it’s not across but beside the football stadium.

Mladost is Zagreb’s biggest track and field stadium, and it’s placed by the Faculty of Kinesiology and in between Sava river bank and Jarun lake. You can come to it by trams no. 5 and 17 – exit at Knezija station and head south through the street between Students dorm Stjepan Radic and Faculty of Kinesiology. When you come to an end, cross the road, and the track is on your right.

If you’re training for a stairs race, medieval part of Zagreb will serve you right. You can find staircases in Tkalceviceva street, Medvedgradska street, Radiceva street and at the Square of May Victims. All of these places are in the city center.

There is a lot of races in Zagreb: two city marathons (in August and October), five half marathons (in March, April, August, October, and November), two 10K races (in May and October) and many other shorter races. Moreover, there is no part of the year without some league – you can participate in spring, summer, autumn, uphill, night, cross-country or trail leagues if you like. That short and sweet leagues are the best way to experience the vibe of running in Zagreb. We’re sure you’ll love it!

[INTERVIEW] Siniša Mareković – the designer of ingenious finisher medals for...