Home Stories NIKOLINA ŠUSTIĆ – the world champion and the merriest ultra-runner in the... 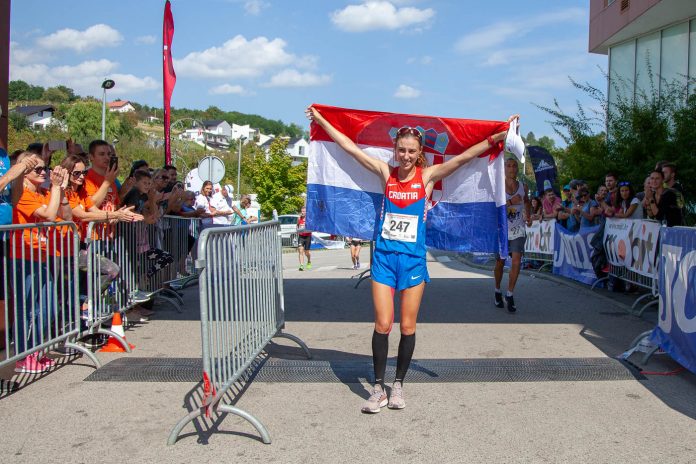 Nikolina Šustić trained basketball with her sisters. She really loved that game, it was her first love, but in time she wanted to try something different, unusual. “I always wanted to prove myself that I can do something special. I am a fighter, my resilience is a gift from God, and I should somehow use it”.

An engineer working at Ericsson Nikola Tesla in Split, ►Nikolina Šustić started running when she and her twin sister Nataša applied for half marathon in their hometown. They decided to run the race spontaneously, and people suggested they should run the short race (5 km) considering they have never run longer races, assuming they wouldn’t be able to finish. They were wrong. “We entered the finish line together as winners!”

After that Nikolina continued to train basketball and occasionally run road races.

“In 2011 I decided to run Forrest Gump. That was the real turning point.” Forrest Gump was a 12 hours ultra-distance race, organized by AK Sljeme, Zagreb. She didn’t want to say anyone about running that race except her twin sister. Nikolina ran new Croatian record in 12 hours race – 130.20 km, which was the second result in the world, that year. At that point, it was clear that her talent is enormous.

Her training style is very loose. No strict schedule, no harsh discipline, no force, she just loves running, and it seems to be enough. “Running brings me so much joy. After running a good race, I always can’t believe it was my legs that did this. I know that my crazy head can do it, my heart is leading me, so my legs must follow.” That’s why she often has injury problems, but in spite of injuries, Nikolina always heals and runs another big race.

“I believe there is a place for progress regarding speed, but for something like that you really need lots of discipline and follow the training program through. I’m not sure I want to do that. I love my way of running.”

Meaning: The Queen of Passatore is Nikolinas’ nickname in Italy. La 100 km del Passatore is a 100 k race in Italy, where Nikolina traditionally runs and wins. Four years in a row (2015 – 2018) Nikolina won this race which many say is the prettiest 100 k race in Europe.

In 2017 she ran her best result there 7:34:35, she knocked down the female record and was the first woman in 46 years long history of the race to be on the throne in absolute category, she finished the race before any male runner. “This is my favorite race and my favorite discipline. The race is hard but beautiful at the same time.”

On the top of the world

After the race, Nikolina was really happy and smiling a lot, but she says: “I run with a smile most of my races, but the last 30 kilometers were really hard on me. My leg started to hurt, so I had to start to run and finish the race with my head. I thought to myself – I have to do my best, I lost gold two years ago in Spain, here is my home, and I have to win”.

And so she did. German runner Nele Alder-Baerens came second, the only minute after Nikolina. That alone was a big reason for celebration in Croatia, but her team runners Veronika Jurišić and Antonija Orlić also ran good races so they, as a team, ended third.

Nikolina has nickname Slonica (The Elephant Girl) because she is pretty tall comparing to other ultra-runners, and she jokes she’s like an elephant among them. Always happy, smiling, relaxed and positive, Nikolina must be the merrier ultra-distance runner in the World.

Zagreb Runners – your team for running in Croatian capital

[INTERVIEW] Roel Verlaan: Croatia has an amazing potential for an active...